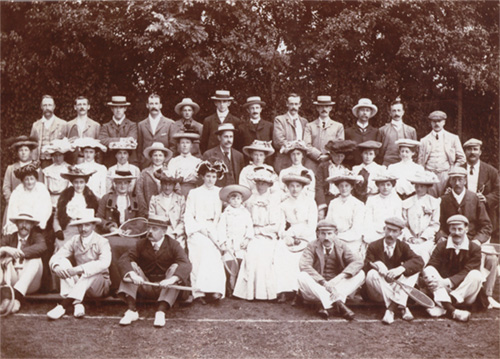 Athlone Lawn Tennis Club was founded in 1885 and was first located in the Garden Vale area of the town on private grounds. During it's infancy it ran the Uisneact Cup Competition. The first editions of Irish Lawn Tennis Handbooks do not mention a club in Athlone. This indicates the exclusivity of the early club.

In 1886 the club ran a week long tournament and a Mrs Sticks won the ladies competition.

In 1889 the club played against Tullamore LTC, the match ended in a 4 all draw. Athlone were deemed winners as they won 11 sets to 10.

It is not certain  if this club died out but before 1950 it was replaced by St Marys (Church of Ireland ) LTC. It's previous name was Garden Vale LTC.

A Westmeath Independent report for May 2nd 1970 reports, "Good news for all tennis enthusiasts this week was the formation of a new Tennis Club in Athlone. At avery well attended meeting in the Royal Hotel the following officers were elected.

Work is now in progress on the first two courts in Pairc Chiarain and should be completed by the end of May. This is the first step in the development of a new social centre for Athlone. Need we say this is a most welcome amenity for the town as it has been without a tennis club for a number of years. The GAA are to be congratulated on their enterprise. So now all that is needed is more members."


In 1991 the name was changed to Athlone Tennis Club and became independent from the GAA club even though it is still based on their grounds.

In 1999 the club signed a 25 year lease with Athlone GAA before applying for lottery funding to install floodlights and all weather playing surface.

The next chapter may soon be written.

Source of information: The History of Irish Tennis, Volume 3, Page 1477 by Tom Higgins.